It was 1975 and David Bowie’s professional life was in some turmoil. He was in the middle of breaking a contract with his manager, and he was still trying to deal with the way his life had changed since “Space Oddity” became a hit a few years earlier. With the help of his new friend John Lennon (who advised him to get rid of the manager), he took a riff that his guitarist was noodling around with for another song, and turned it into his first #1 hit in the US.

In a BBC interview recorded only a couple of days before he died, Lennon said that David Bowie had a vast repertoire of talent, and it was interesting to see him do most of his song composition right there in the studio. “He goes in with, like four words and a few guys, and starts laying down this stuff, and he has virtually nothing, he’s making it up in the studio.”

As usual, you have SO. MANY. OPTIONS. for listening. Your favorite podcatcher may already have it, or you can listen/download through the player right here:

And also as usual, if you feel the urge to leave some positive feedback on iTunes or wherever you happen to get your stuff from, I won’t stand in your way.

Oh, and as promised, here’s the clip of Bowie on Soul Train: 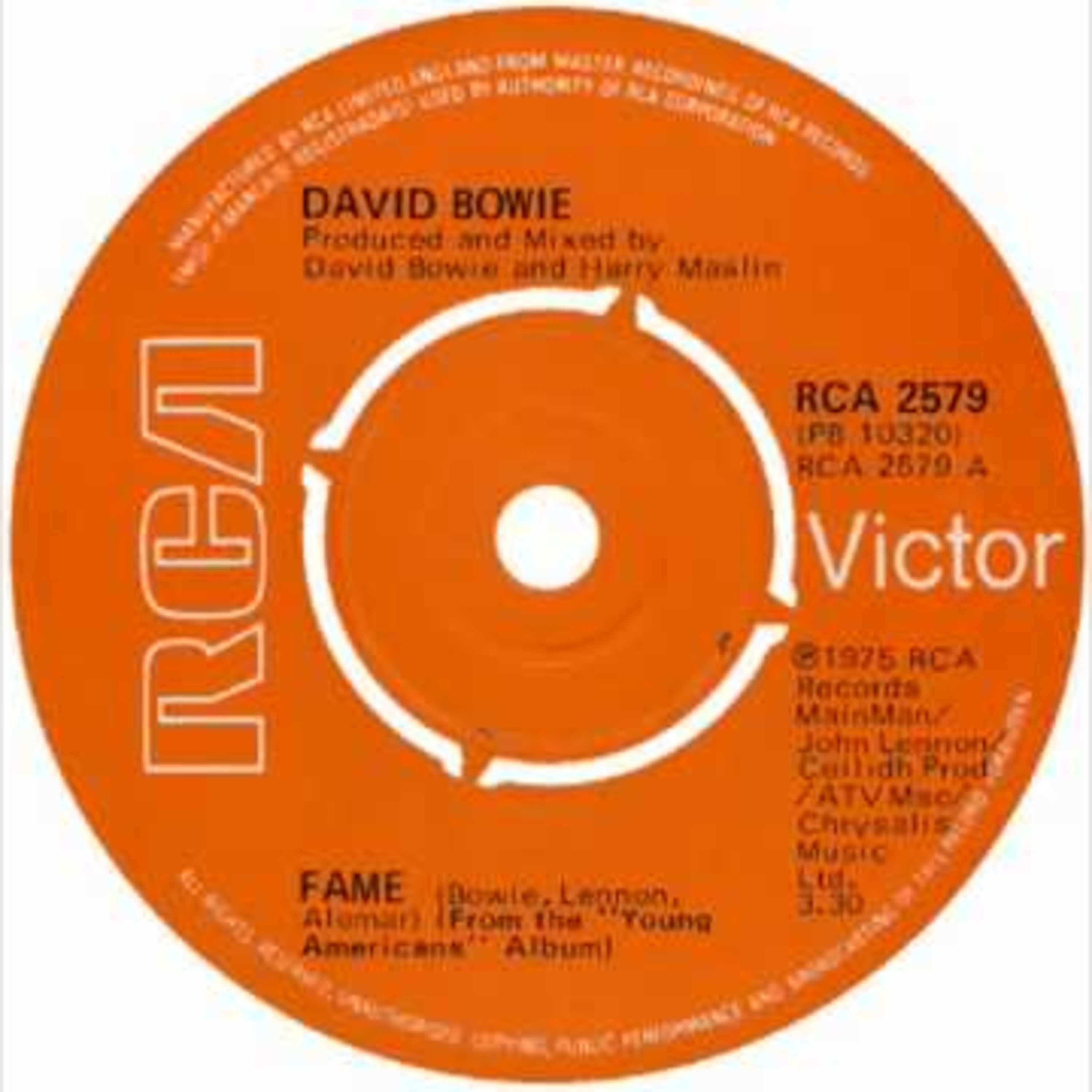 In 1975, David Bowie was a known element in the rock world, but he still hadn’t cracked the Top Ten in the US. Then, with a little inspiration from John Lennon and a little venom toward his former manager, Bowie came up with the tune that cemented his place in the Rock and Roll firmament.

Most people who know me personally know that I’m originally from New York, but it’s not because I have an accent, because I don’t.

Well, I DO have an accent of sorts, but it’s tough to suss out that I’m from the NY metro area. Most people think I’m from the Downstate region of New York, like Poughkeepsie or Newburgh. But the fact is, I’m from a small town on the north shore of Long Island called Kings Park. When I was a small child, Kings Park had a huge mental hospital plunked down in its center, and most of the 5000-odd people who lived in that town, worked at the hospital. Nowadays the hospital is closed, the grounds are long-abandoned, and the town population is close to 20,000.

But for all that, Kings Park and its nearby cousin, Smithtown, manage to have a connection to a couple of Christmas songs. Kings Park was the center of a nationwide news story back in 2013 regarding the song “Silent Night”, and as for Smithtown…well, you’ll just have to listen to see what Smithtown has to do with any Christmas song.

If you’ve got a favorite podcatcher, you should have this episode already! If you don’t, and you want to get it from here,  just click the media player below:

Hey, you know what would make a great Christmas gift for me? A positive rating and review in whatever software you’re using to download the show. But iTunes still reigns supreme in this respect, so PLEASE go to iTunes dot com (even if you don’t typically use it) and leave me a positive rating. 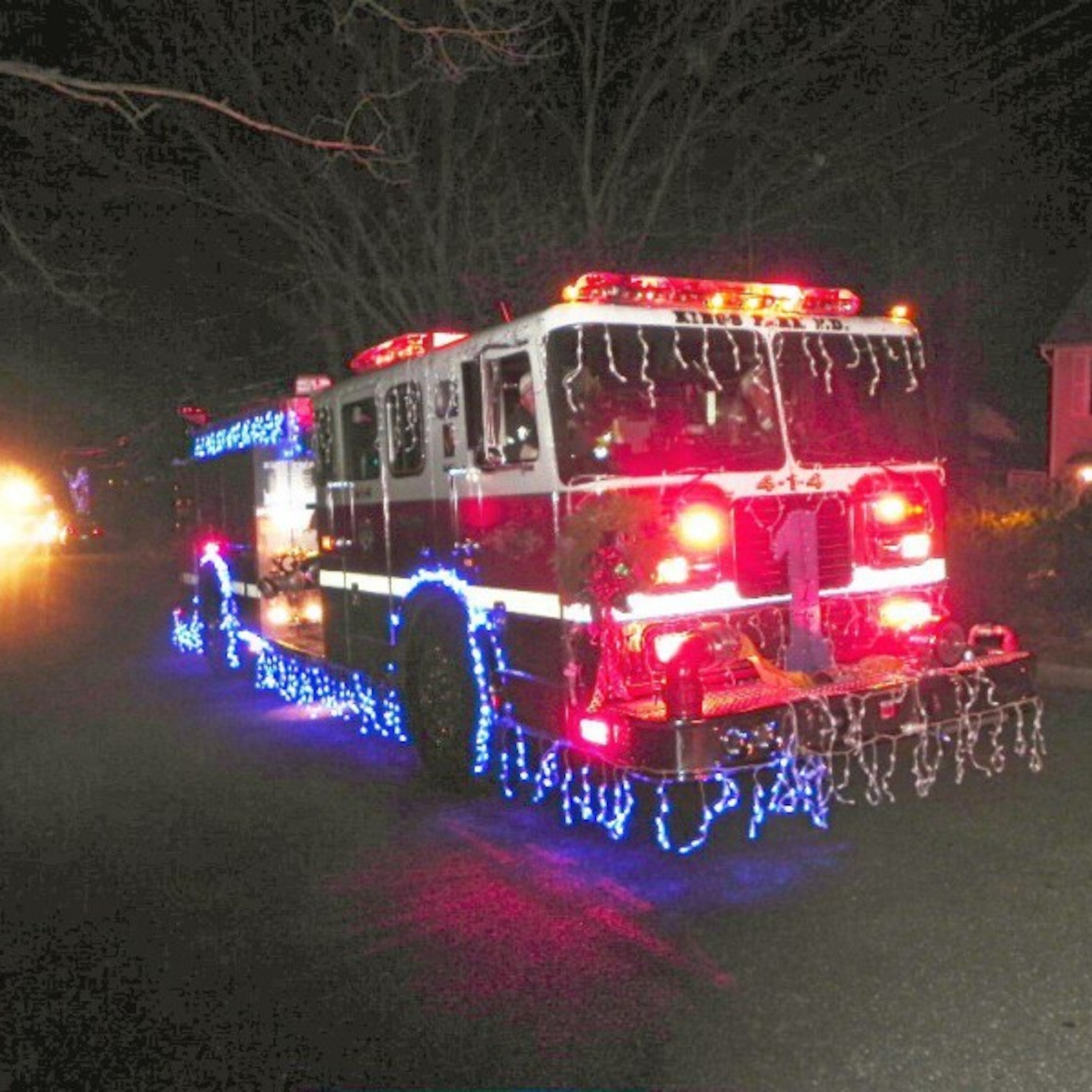 Smithtown, New York is a collection of hamlets on the north shore of Long Island. I always had trouble explaining to people where it is (“Go to Commack and turn left.”), but despite this, Smithtown has an interesting connection to two rather disparate Christmas songs.

It was the Summer of Love, and as Johnny Rivers sang, everybody kept on playin’ Sergeant Peppers Lonely Hearts Club Band.

Everybody, that is, except for the fans of an underground band playing the clubs in Los Angeles, who kept calling the local radio stations and requesting a song from that band’s debut album. Eventually Elektra Records put out a shorter version of that seven-minute song, and before long it was climbing the charts nationwide, spending three weeks in the #1 slot in July of 1967. The self-titled album itself couldn’t break Sgt. Pepper‘s hold on the Billboard’s Albums chart, but being #2 to The Beatles is pretty respectable, nonetheless.

The Doors got their name from the title of an Aldous Huxley book called The Doors of Perception, which in turn came from a William Blake quotation:  “If the doors of perception were cleansed, everything would appear to man as it is, infinite.”

Today’s show is a little bit on the short side, coming in at just over 10 minutes, and I think it’s because I’m talking so damn fast. I shouldn’t drink so much tea right before recording the show.

And as usual, if you’ve got a favorite podcatcher, you should be able to hear this week’s show already, or you can just click the player below:

Also as usual: if you were to go to iTunes or wherever you find your podcasts (Spotify! Really! I had no idea!) and leave a rating, and maybe even some feedback, well, that’d be nice too.

And SCROLL DOWN! Go check out Doug Miles’ stuff! 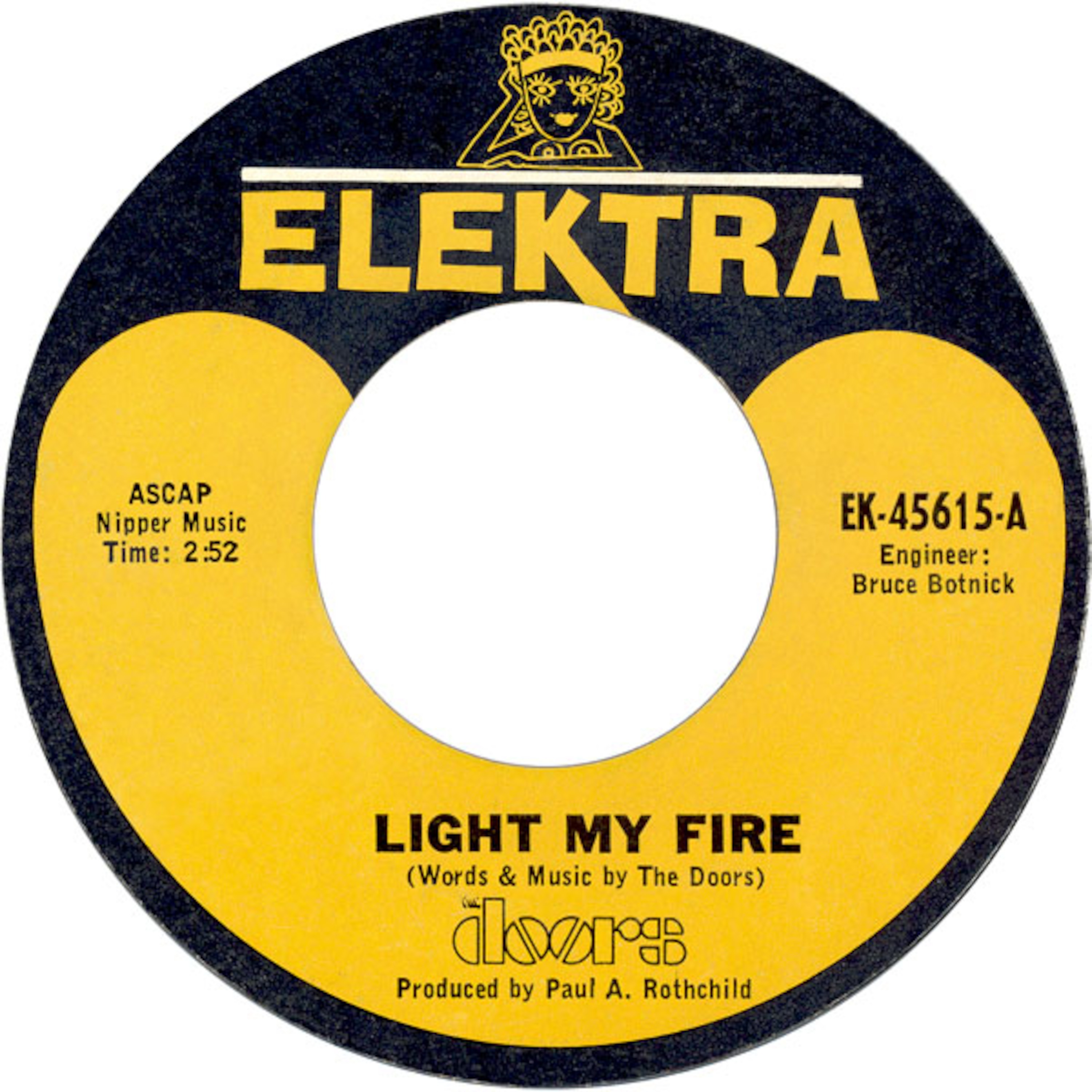 In the Summer of Love, an obscure club band from the LA area climbs the charts to become one of the big hits that year. It wasn’t The Doors’ first single, but it was absolutely their first hit and their signature song. It was the biggest album of 1982, and the title track was the last Top Ten single to come from it. That’s seven singles out of nine tracks total.

Michael Jackson wanted to top not only the success, but the ambition of his previous album, Off The Wall, and I think we can all agree that he more than succeeded. Thriller remains the largest-selling album of all time.

What! you say, bigger than Sgt. Pepper’s Lonely Hearts Club Band? Bigger than Dark Side of the Moon? Bigger than Bat Out of Hell? Yes, indeed. As of this week, the top 15 all-time sellers are:

That’s THREE albums Jackson has in the all-time Top 15, and Off the Wall isn’t even one of them. (It’s way down the list, a spot or two below HIStory.)

Anyway. Today we’re looking at the title track, a song that started as “Starlight” and ended with Quincy Jones’ wife recruiting Vincent Price to do a little white-boy rap.

Per our Standard Operating Procedure, if you’ve got a favorite podcatcher, you should be able to hear this week’s show already, or you can just click the player below:

And, as usual, if you were to go to iTunes or wherever you find your podcasts and leave a rating, and maybe even some feedback, well, that’d be nice too. 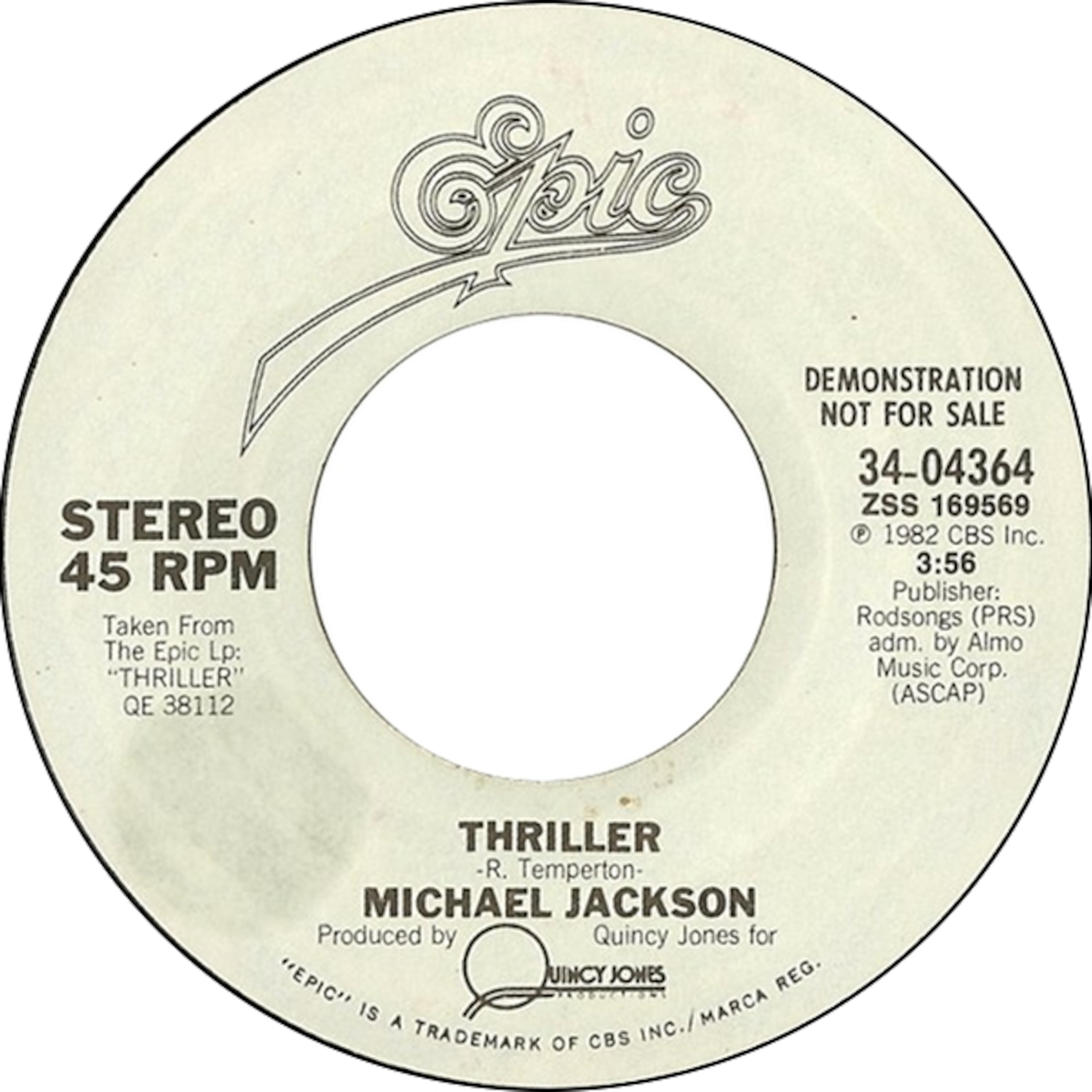 It’s the holiday season, and what better way to celebrate than by taking a deep dive into a perennial Halloween favorite? (Hey, Halloween is a holiday too.) It’s the story of how a song went from “Starlight” to being the basis of a horror-themed video.