Eddie Cochran’s premature death in an auto accident cemented him as forever young in his fans’ minds. And it didn’t hurt the story that he died protecting his girlfriend from harm.

Cochran was in a taxi with his girlfriend, Sharon Seeley, along with Gene Vincent and their tour manager, Patrick Thompkins on the night of April 17, 1960. It was the final night of a very successful tour, and they were in Chippenham, on their way from Bristol to London in order to catch a plane back to the United States. The road they were on was dark and winding, and the car was clearly going too fast. The driver had realized that he’d made a wrong turn, and when he hit the brakes the car spun out of control and smashed into a concrete lamp post.

Seeley reported that Cochran threw himself across her to protect her, and the impact threw him upward against the roof of the car and then out the door, which had sprung open. Gene Vincent had broken his collarbone and re-injured his left leg, which he’d broken badly in 1955. The accident left him with a limp he’d have for the rest of his life. 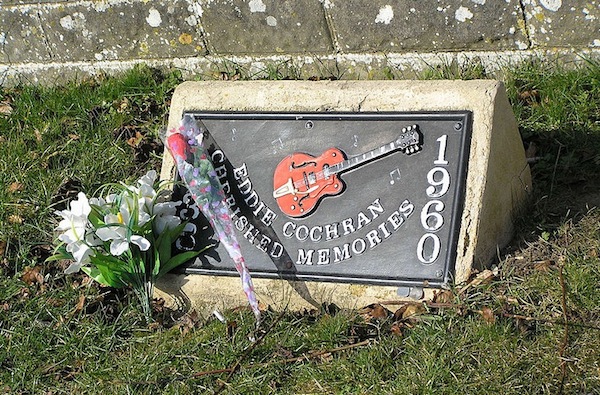 Seeley and Thompkins walked away with minor injuries, but Cochran received a serious brain injury and died a few hours later in a hospital. To this day there’s a memorial marker on the spot.

Coincidentally, one of the people who saw Cochran during this tour was a young George Harrison, and both the guitar playing and the on-stage persona made a huge impression on him. He once recalled it in an interview:  “He was standing at the microphone and as he started to talk he put his two hands through his hair, pushing it back,” Harrison later recalled. “And a girl, one lone voice, screamed out, ‘Oh, Eddie!’ and he coolly murmured into the mike, ‘Hi honey.’ I thought, ‘Yes! That’s it—rock and roll!”

The story of Eddie’s signature hit is the subject of this week’s show. If your podcatcher doesn’t have it already, feel free to listen to or download the show from right here:

And, as always, leaving reviews wherever you get your podcasts is always a welcome thing.

Other Places to Listen